The “Hurricane Diaries” – Part I 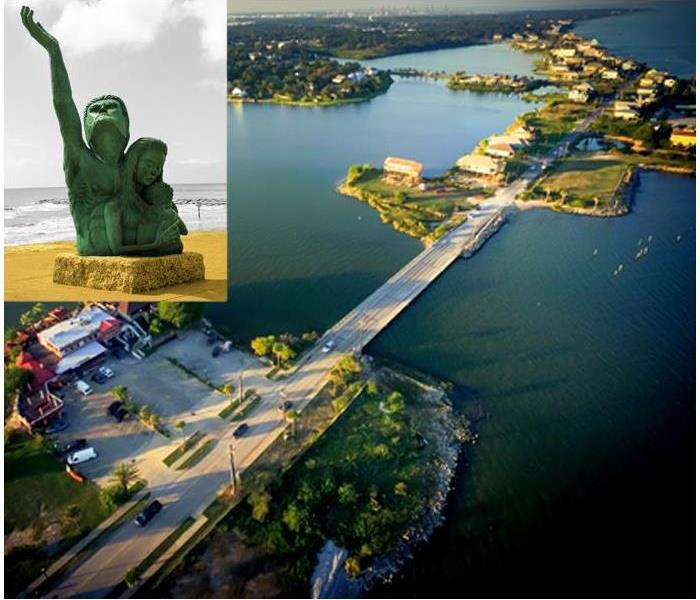 It may not look like much, but this inlet of Galveston Bay was the scene of SEVERAL chapters in the "Hurricane Diaries!"

As we remembered the 120th anniversary of the epic 1900 Galveston Hurricane this week, one of our team members began to reflect on all the hurricanes she had witnessed during her years on the Gulf Coast. So…we’re turning this over to her, as she shares the first of her “Hurricane Diaries!”

“I grew up in a little Texas town, situated about halfway between Houston and Galveston, called La Porte. Although it has grown over the ensuing decades, if you hear of La Porte on the news, chances are it means our little piece of Galveston Bay is about to be slammed by a hurricane…OR something has gone terribly awry in our little nook of the Houston Ship Channel. As a result, my childhood is filled with MANY memories of hurricanes!

“La Porte has miles and miles of waterfront property, all arising out of our little Sylvan Beach – an early 1900s resort area for the elite of Houston seeking the cooling sea breezes – and is no stranger to repeated hurricane damage over the years. And neither was I!

“Even as a preschooler, one of my most vivid memories involves my parents and I packing towels around my windows and walls of MY bedroom. Our house was situated one row off of the bay, and my bedroom just happened to be facing the bay side of the house. Fortunately, in the glow of that Coleman lantern (my parents were the ‘always prepared’ types), we only had to battle condensation and NOT rising water or rain.

“A construction pro, my Daddy insisted the house be built (or, as I came to learn, the contractor thought ‘over-built’) on a foundation at least six inches higher than our neighbors…or what was considered industry standards at the time. He also clad the entire exterior with a custom brick designed with special fire and wind resistance. Now remember, this was the late 1940s and he was using his GI Bill financing to build their dream home.

“However, aside from a layer of tar paper – or some equivalent thereof – there were no weather-tight house-wrap materials, no rigid insulation boards, no fluffy pink Fiberglas or foam filling open spaces, just those ‘special’ bricks and the framing. No wonder we had condensation forming everywhere as that storm pelted our home!

“But, probably, one of the main reasons I remember that first hurricane, is because they had the audacity to use MY NAME for it – 'Debra!' The nerve…not only did it wreck a perfectly good end-of-summer, but my name was being bandied about everywhere in decidedly derogatory terms. Those memories of 'Debra' were relatively short-lived, as the next year we were at the center of one of the most legendary of modern hurricanes: 'Carla!'

“For that one we DID evacuate! We gathered up whatever preparations my parents had the insight to pack and went into 'downtown' La Porte…since we did not live in La Porte 'proper' but about two miles south along Old Hwy. 146. We gathered with other members of our church congregation in a structure on the property known simply as the 'Telephone Building.' Later I learned the Telephone Building had been built to withstand all manner of havoc and even at one point was designated a civil defense shelter. And, later it served well to house the teenage Sunday School classes – after all, it HAD withstood 'Carla!'

“And while I remember ‘camping out’ in the old Telephone Building with friends and their families, I starkly recall my Mama taking me outside our home just as the first waves of the storm leading edge were beginning to come ashore. To see the water in our streets roiling furiously over our feet, and feel the rain coming down like tiny needles, while the trees bent into shapes I had never imagined, I was instantly struck with awe over the raw power of Mother Nature.

“Fortunately, we all remained safe in that old Telephone Building, and went home after the storm had moved inland – to affect those hundreds of miles from us – to survey the damage. Even those short two or three miles literally opened my eyes (along with a dropped jaw or three) to exactly HOW bad it could be!

“Once we arrived, we saw many of our neighbors’ homes barely standing as shells or watermarks going up the walls that were still there. And, never one to be smug, my Daddy quietly whispered, ‘And THAT’S why I built our house higher!’ We had NO water in our home, and had only lost a few shingles…and a couple of trees. My parents later explained (in those days BEFORE flood insurance was even available), how many people who saw their homes flooding, would literally set their roofs on fire in hopes of getting SOME insurance coverage for their hurricane losses.

“Which leads to one more powerful hurricane memory – my Mama with a spray bottle filled with bleach, as part of her inevitable post-hurricane rituals. Daddy would take down his pre-cut, pre-measured, pre-labeled plywood window coverings and Mama would be spending the next few weeks on-alert for any moisture-related mold and drown those little spores in Clorox! To this day, the smell of bleach makes me think of her.

“After those initial two storms by the time I was in first grade, I can honestly appreciate all of the nifty equipment, modern dehumidifiers and skilled technicians we have here at SERVPRO of Northwest San Antonio, and I’m looking forward to learning even MORE about all of it. I only wish someone like this had been around during my early hurricane days…and I bet a lot of others do, too!”

As “eventful” as Debbie’s early hurricane experiences might have been, her “Hurricane Diaries” have MORE chapters we look forward to exploring in subsequent posts. So stay tuned for the next entry in the “Hurricane Diaries!”