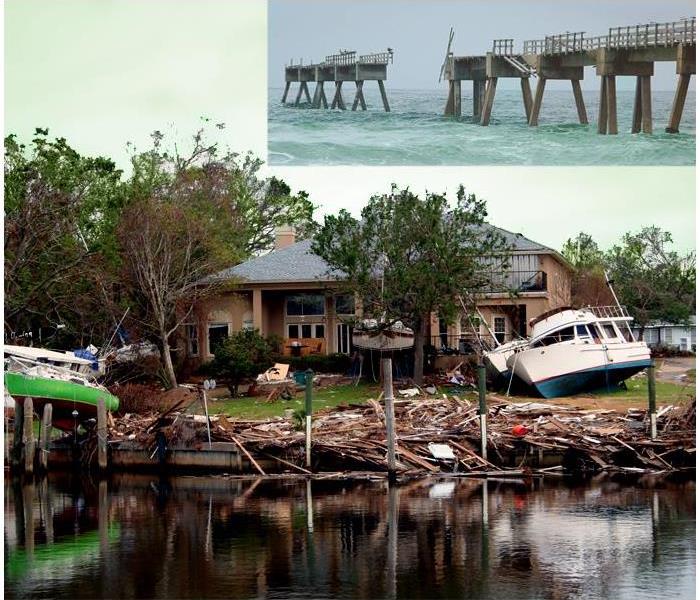 Just one example of the “landscape” a 5½-year-old saw after Hurricane Carla hit her hometown!

Once more, the residents of the Texas Gulf Coast find themselves up to their waders in the remnants of yet ANOTHER named storm this year. Who could have ever imagined we’d actually run out of names by mid-September and have moved into Greek territory?!? Guess it’s just another of the squares on our 2020 Bingo cards!

So, it seemed appropriate to once again turn over the blog to our staff member, Debbie, for another of the entries in her “Hurricane Diaries.” When we last left her recollections, her family had just returned home in the aftermath of legendary Hurricane Carla and THIS was when the five-and-a-half year old began to understand WHY everyone had made such a big deal about “another hurricane.”

“As I mentioned before, in 1961 La Porte, Texas was the quintessential ‘small town’ – which just happened to be in the shadow of the one of THE fastest-growing cities in the United States. I remember the population signs marking each of the city limits, being somewhere in the low 3000s, and the MAJOR milestone years later when we finally exceeded five thousand people!

“Although my family did not live within the city limits of either La Porte, or any of the neighboring bedroom communities of Lomax, Shoreacres or Morgan’s Point, you could drive from one end of the entire ‘developed’ area to the other in less than 20 minutes – except through Shoreacres, a well-known speed trap among the local teens and lead-footed adults! So even on a ‘busy’ day, we could be from our driveway to the downtown school, library, movie theater or church parking lot in under 10 minutes.

“But, on THIS morning, it was a drive like I had never experienced. Pieces of homes, furniture, cars, trees and power line poles were strewn across even the ‘major’ thoroughfares. The familiar landscape I had known so well, no longer existed. Carla had transformed my picturesque hometown and left desolation and destruction in her wake. I was numb…and pretty sure at several points my mother told me to close my dropped jaw.

“However, even the torn-away roofing on our grocery store, hardware store and bowling alley could not prepare me for what I saw as we drove further down Old Hwy. 146 closer toward the suburban bayfront south of town – AND our home.

“I discussed earlier the devastation of many of our neighbors’ homes. But that just scratched the surface of the storm damage. Imagine driving down a decent-sized main road, then suddenly seeing a 24’ cabin cruiser with twin inboard engines SITTING IN THE MIDDLE OF THE HIGHWAY! And we’re not talking tipped over in a ditch to the side. No siree, we’re talking spread broadside – perfectly upright on its keel – across the entire two-lane blacktop, with sails akimbo and some lodged in treetops.

“That can leave some indelible memories in the sponge-like brain of a youngster. Now, add a drive past the local boating club – the loftily-named Houston Yacht Club (but, as the OLDEST yacht club in the state of Texas, I guess they did have the right to put on some ‘airs’) – and seeing literal STACKS of craft one on top of the other, like a giant nautical Jenga game. Mind blown!

“First row bayfront homes now offered full water views FROM THE STREET. But probably the most bizarre sight I think I saw that day, was our neighbor’s classic Jaguar, MG, Triumph and Sunbeam finely-restored motorcars PERCHED IN TREES like a murder of crows! Between that, and the boats of all shapes and sizes – along with their equipment, rigging and sails – littering front yards, I gained a true understanding of a hurricane’s power that day.

“It’s no wonder I grew up to be a storm-chasing journalist on the Gulf Coast…something we might explore in a future diary entry! But it also gave me genuine empathy for anyone who had ever sustained any type of storm damage. Even though it may not be a classic MGA in a tree, ALL damage caused by major tropical storms is literally life-altering. In addition to this insight, I also walked into the wake of any storm with a MORE-THAN-HEALTHY respect for both the storm and those who feel the effects of its power.

“Somehow, it’s different when the nice lady who always has fresh cookies now must spread her clothes, her rugs, her draperies – basically, her LIFE – across her front lawn. You understand the real pain of the affable neighborhood doctor who now has a tree where the entire center of his home used to be. You tear-up when you see rows upon rows of pylons sticking out of the water, where neighborhood piers once hosted regular gatherings and formed the social nucleus of our little enclave.

“Those two little words ‘storm damage’ honestly seem insufficient to convey EXACTLY what this can entail. But to their credit, each one of our neighbors went through the laborious task of salvaging their lives and rebuilding their American Dream. Although this did not happen overnight, and involved a fair amount of insurance ‘discussion’ since this was BEFORE the time of federally-subsidized flood coverage, it nonetheless offered an honest insight into the indomitable nature of the human spirit…with a little (OR LOT) of help from our friends!

“I guess that’s one of the things I remember most – everyone helping, everyone pitching-in – and as a part of that effort, now I can REALLY appreciate the skills and equipment at our disposal here at SERVPRO of Northwest San Antonio, to mitigate the damage of any storm, of any magnitude! Who knows, maybe it was experiences just like these from my childhood that were the impetus for the original founding of that first SERVPRO back in 1967…just a few short years after Carla. Hmmmm? Just a thought!”

So as this same area from Debbie’s most recent “Diary” entry again now faces the destruction and mayhem of even a “minor” hurricane like Beta, we have a bit more insight into both the physical AND emotional devastation it can leave in its path. As Debbie has demonstrated, for us it’s REAL…we take EVERY situation to heart…we honestly CARE about these lives…and ALWAYS stand ready to lend a helping hand!