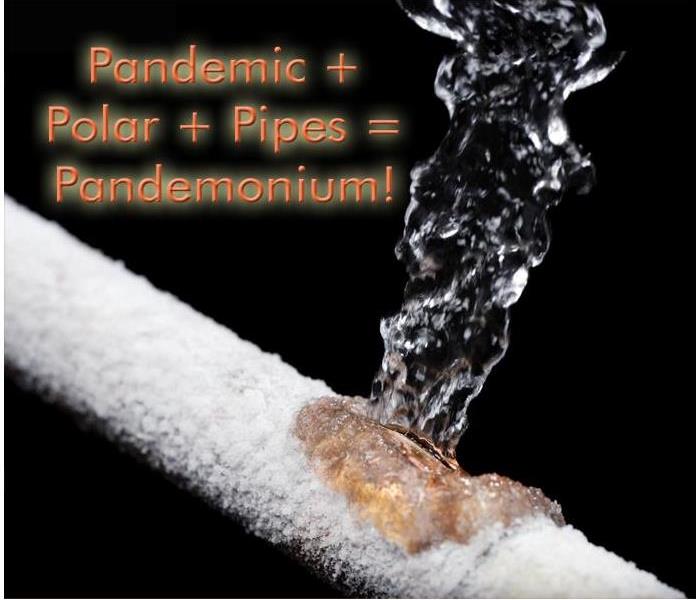 Take unprecedented freezing temps, combine with quarantines, then add in buildings not designed for this weather, and you have a recipe for disaster!

Recently, we discussed the “SERVPRO Way” of handling disasters…highlighting the company’s nationwide mobilization to answer an SOS from Texas in the wake of the unprecedented polar wave. And this impressive response allowed us to bring a degree of normalcy back to affected families and businesses.

However, this particular natural disaster carried with it an ADDITIONAL variable unlike any other – COVID pandemic lockdowns and quarantines! People who would have normally sought refuge elsewhere found themselves “stuck” in their frigid homes, without heat or running water, and ill-prepared for these temperatures. Businesses with heavy traffic in “pre-lockdown” times, had been shuttered for days (or weeks) on end and as a result did not realize their freezing properties had burst pipes…compounding the damage.

We saw the photos, and heard the statistics, but aside from a few of the extreme instances featured on newscasts, it can be difficult to put a personal “face” to these reports – unless it happens to YOU!

Once again, our staff member who wrote about her hurricane recollections in “Hurricane Diaries – Part I & Part II” – just happened to have a “frozen pipes” experience. Fortunately, her home escaped this fate last month here in Texas. But, she had one VERY memorable Christmas morning years ago in the horse country of Lexington, KY.

“We had recently moved from a townhome near the metro area of Lexington, KY to a sprawling cedar and stone home situated on five acres, located between two horse farms. We wanted more room for our growing young son to be able to play outdoors…and having Kentucky-bred thoroughbreds come visit us at the fences around our property was just an added bonus.

“After getting settled in during the breathtaking fall months – surrounded by the legendary ‘blue grass’ and dazzling array of autumnal colors – we prepared for our first Christmas in this picture-perfect home. A full two-story vaulted ceiling in the living room allowed us to have a truly majestic (and BIG) tree, next to the stone fireplace and visible from the rural pike (roadway) through the expansive front windows. In hindsight, we SHOULD have photographed this scene for the following year’s holiday card!

“Excitedly, we prepared for our son’s first “real” Christmas, since he was only seven weeks old the year before. And, after the Christmas Eve rituals, we put our boy to bed – with visions of sugar plums dancing in his head – then set about the extensive work of being busy Santa’s Helpers.

“Apparently, the ‘early-riser’ gene tends to skip a generation, and our son got it! So we set our alarm to make sure we were up before him and fell asleep to the scene of gently falling snow on the moonlit landscape.

“Spurred by the blaring alarm the following morning, my husband stumbled downstairs for his lifeblood – coffee – and noticed the power to his beloved coffeemaker was off. So, he went into the garage to flip the breaker…and stepped down into shin-deep ICY water!

“I heard bellowing and some DISTINCTLY ‘non-Christmas’ language! Apparently, the ‘below-the-freeze-line’ pipes we had become accustomed to in Missouri, Michigan and Ohio were NOT a ‘thing’ in this part of Kentucky. And, just like what we recently experienced in Texas, this area was not equipped for this type of weather extreme.

“Overnight, the ‘gentle’ snow had picked up volume and the temps had dropped down to the single digits and were steadily dropping below zero. My husband discovered the interior water cut-off was not stopping the flow, so there he was – in his holiday pajamas and fuzzy slippers – running out the front door and frantically digging in a foot of snow to locate the main water cut-off valve!

“So there we were, with no power or water on Christmas morning. Yes, in retrospect, I realize this sounds like something out of a wacky sitcom – and looking back, it really kind of was!

“Luckily, we still had our massive fireplace (along with an ample supply of firewood) and a good relationship with a local plumber. And, since snow and ice were not unknown commodities to local utilities, we had power restored by the next morning. Unlike some of our rural neighbors, we escaped any major damage since the burst pipe flooding was limited to the garage concrete floor. I was never so glad we had unpacked and moved everything into the house before Christmas…and would NEVER curse that steep step up from the garage into the kitchen back door!

“Of course, the clean-up involved LOTS of fans – after the temperatures rose – and some drywall replacement, along with new INSULATED pipes. However, after going through even that ‘minor’ pipe burst experience, I can genuinely sympathize with the effects of this ‘polar pandemonium’ my friends and neighbors had to experience!”

And although some of our local SERVPRO of Northwest San Antonio did NOT escape the impact of this recent weather – and we will share another personal story in an upcoming post – it was nice to be able to jump in and help not only our wider community (taking an abundance of COVID-safe precautions) but our own SERVPRO family, as well!