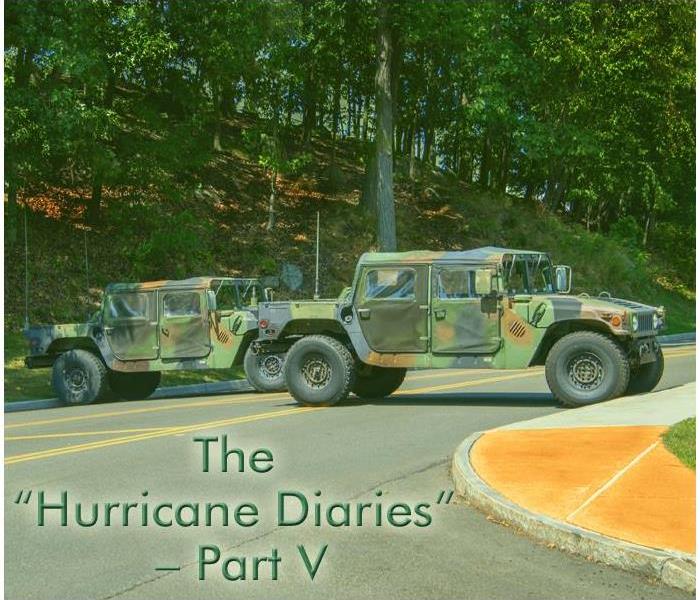 When a hurricane landfall is predicted, MOST folks would let something like roadblocks deter them from heading INTO a storm…but not our journalists!

It was only a matter of time before a new tropical storm hit the 2021 weather radar, and we’ve got Hurricane Fred warming up in the Caribbean bullpen now. This comes as no surprise, with an active season still predicted by the National Hurricane Center branch of the National Oceanic & Atmospheric Administration (NOAA), coupled with Hurricane Elsa already earning the distinction of being the earliest fifth-named storm on record.

So, we’re presenting another installment of “The ‘Hurricane Diaries’” from our team member, who has seen more than her fair share of major storms, and shared her past first-hand experiences in “Diary” entries Part I, II, III, and IV. We encourage you to check out these accounts, as we dive into the fifth chapter:

“As I’ve mentioned before, in the early days of my career I was a working journalist and that meant following the story…regardless of the circumstances. And to be honest, usually this took us into the worst possible situations and put us in the position of encountering people on their worst days. Not only did we take these rubble-strewn – and often dangerous – paths, but we did so willingly! Eventually, some of us (like me) chose a less perilous and “grimy” career trajectory.

“However, I heartily admire those journalistic colleagues who devoted their entire professional life to continuing to ‘follow the story.’ In fact, one of the featured characters in this particular Diary entry recently finished up his career – having worked for newspapers for over 40 years. Kudos, Chuck Yarborough! But, I digress…

“It was August of 1983 and my friends (who worked at the Corpus Christi Caller-Times newspaper), along with my fiancé (an award-winning photojournalist also on the C-T staff), had all gathered in Houston to attend an extraordinarily rare reunion concert of Simon & Garfunkel at a local venue…the now-defunct Astrodome. At the time, these were the most we had EVER paid for tickets, and we were understandably excited. So there was no way we would let the “possibility” of a hurricane dampen our enthusiasm!

“My friends had even used precious vacation time for this event, and arranged a babysitter for their toddler daughter. Even reports of Hurricane Alicia heading our direction failed to deter us and we continued to make plans – even though landfall was imminently predicted for that night. Unlike those of us who grew up on the Gulf Coast and were accustomed to hurricanes, the venue and artist management teams made the decision to cancel the concert during their afternoon sound check.

“So here we were, literally all dressed up with nowhere to go. While Liz decided to go hang out with her mother (who was gladly serving as a sitter for little Brandi), the rest of us made the choice to go cover the storm. So Chuck (Liz’ husband), Stephen (my fiancé) and I packed up Stephen’s new-ish Pontiac Phoenix and headed for the ‘action’ in Galveston. Let the adventure commence!

“Now, although Stephen had covered other hurricanes and Chuck had lived in the greater Houston metro area for a number of years, I represented the sole ‘local’ member of our group…and seasoned veteran, having experienced NUMEROUS hurricanes since a toddler. My job on this particular expedition was to serve as a ‘Sherpa’ of sorts, since I knew every ‘alternate’ route covering the area from Conroe to Freeport, and also had numerous resource connections. So off we went, heading straight into Alicia’s path.

“Having gotten authorization from the Caller-Times management to cover the hurricane – since they were in town anyway (and newspapers of the era were notoriously ‘thrifty’) – Stephen and Chuck now had ‘official’ sanction to risk life and limb to, yes, ‘follow the story.’ Taking back roads to reach I-45, otherwise known as the Gulf Freeway, we emerged just north of the main causeway leading into Galveston.

“Now, a piece of hindsight advice might be to question the wisdom of being one of the ONLY cars – aside from official police and militia vehicles – heading the opposite direction of thousands of other cars and trucks! In fact, we encountered several checkpoints and had to not only display our press credentials but do some fancy talking to be allowed to proceed TOWARD the danger. Even then, it did give you a bit of a gnawing feeling to see everyone else headed in the opposite direction. But WE were intrepid journalists!

“Flooded roads? Driving rain? Storm surge? Pffft…nothing to worry about! Yeah, we were young and felt invincible – especially when fueled by journalistic adrenaline. We would learn several lessons the hard way over the next few days!

“Our first stop was at Chuck’s old stomping ground, the Galveston Daily News where I knew the News Editor who I had worked under for several years prior to her move to the GDN. Just a note on ‘Hurricane 101’ – establish a good base of operations in any area where you will be covering a disaster. So while Stephen and I began to make inroads at the newspaper, Chuck went to secure us accommodations. And that’s where things first began to ‘head south’ for our little expedition party!

“Not having actually lived and worked in the area during a major hurricane, Chuck was wholly unaware of exactly HOW powerful such a storm could actually be. So, seeking a prime vantage point, he got us a room right on the Galveston Seawall. We were right up the street from the historic landmark Flagship Hotel…the first hotel in North America located entirely over the water. The perfect spot to document all the mayhem. Yeah, this was the first mistake!

“Rising tides, torrential rains driven by hurricane-force winds, and debris already floating down major thoroughfares could not be stopped by simple brick walls or windows. Not only did our room (and ALL possessions – including changes of clothes) get soaked, but shortly after Alicia made landfall the entire façade of the Flagship began to DISINTEGRATE like a slow-motion disaster movie sequence. Yes…water can do that!

“Additionally, we were unable to even make our way back to the room to retrieve anything for DAYS! So there we were, trying to find someplace to just wait out the storm that night in the cavernous newspaper building while the electricity continued to fluctuate before going out completely. Fortunately, the GDN had back-up power and the business of journalism continued.

“We watched the building’s huge glass windows with trepidation, and found shop rags and anything else available to absorb the water seeping through the walls. And we waited until we could finally spring into action.”

We’ll pick up Debbie’s story in the next installment of The “Hurricane Diaries” next week to see how they weathered the floods, and how SERVPRO could have been of service to these young waterlogged journalists!