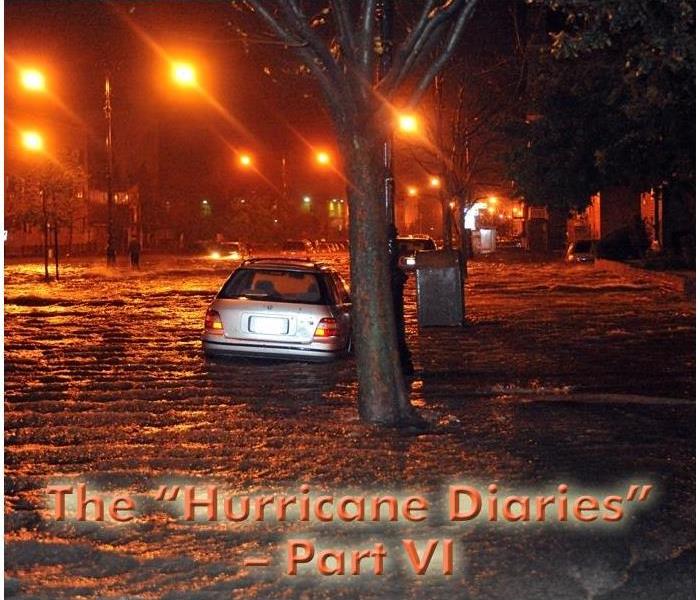 While our journalists DID drive through flooded streets to document the hurricane damage, it doesn’t mean they SHOULD have!

As Category 4 Hurricane Ida roared ashore in Louisiana this past weekend – on the 16th anniversary of Katrina, no less – we once again visit our team member’s storm memories. A veteran of hurricanes since her preschool days, she has chronicled some of her experiences as both a Gulf Coast resident and later, as a working journalist.

We honestly couldn’t imagine a more timely moment for another installment of her recollections in “The ‘Hurricane Diaries’”…and invite you to revisit some of her earlier chapters (Part I, II, III, and IV) and be sure to check out the first part of this particular experience in Part V before jumping into this latest continuation of her Hurricane Alicia story:

“So, there we were – me (the team hurricane Sherpa), Stephen and Chuck, along with my former editor Betsy Webber and her EXTREMELY flatulent dog – riding out the storm in the Galveston Daily News building on the edge of the island. For those who have had limited (if any) hurricane experience, it seems like these newsworthy storms tend to make landfall at night. Who knows why, but that has been my experience more times than not.

“But, in the meantime my fiancé Stephen had reconnected with several of his wire service comrades and negotiated use of their photo transmitter equipment. Mind you, this was before the internet as we now know it, pre-fax machines, so having access to a “drum” transmitter was like hitting the mother lode for a photojournalist. Reporters could use the newspaper landlines to call in their stories (yep…no cell phones or even pagers!) to their respective publications and agencies. But without the ability to send photographic evidence of the personal and property devastation, visual journalists were literally up a creek without a paddle!

“Now the REAL work could begin, as we took to the streets. Mind you, we were exhausted, soaked to the bone and had to ‘charm’ our way past roadblocks and first responders trying to protect the public. They definitely were not catching us at our best! But for journalists, this was the opportunity to shine…careers could be ‘MADE’ by coverage of a hurricane like Alicia. After all, Dan Rather earned his stripes covering Hurricane Carla decades before along the Texas coast!

“Armed with camera equipment and the ubiquitous reporter’s notebook, we documented storm surge, destroyed landmarks, streets flooded with water and random bits of debris, along with a list of evacuation shelters we braved the weather. And while the going was laboriously slow – first finding passable routes and then literally inching our way along roads that normally would have taken us to our destinations quickly, now consumed too many precious minutes – we were fueled by journalistic zeal. And not a lot of common sense! Let’s face it, heading out in a major Category 5 storm would not be considered a ‘smart move’ by most sane people.

“That’s when the full impact of Alicia REALLY hit home…especially seeing the crumbling walls on venerable Seawall buildings that had weathered many previous hurricanes. Yes, cyclonic activity and 150+ MPH winds most definitely can leave a trail of devastation in their wake, but the power of water should never be underestimated. The effects of the sheer force volumes of water, rushing over buildings and through streets, will leave the uninitiated dumbfounded!

“So, with no regard for the well-being of either ourselves or Stephen’s car, we collected insightful images and personal accounts for hours on the stormy streets. Periodically, we returned to the GDN building so Chuck could call in his stories to the Caller-Times and Stephen could develop his film and make prints in the newspaper darkroom. This was followed by the inordinately tedious task of sending out each picture INDIVIDUALLY across the AP and UPI wires…complete with his photo credit. A real career coup for a photojournalist – and yielded impressive additions to his professional portfolio!

“After about a day-and-a-half we were FINALLY able to reach our water-soaked room on the Seawall. Remarkably, some of our clothing was actually dry enough to wear. So we collected our belongings and returned to the Galveston newspaper to finish up our coverage of the storm…relieved to be wearing DRY underwear again! However, in the post-storm light, we noticed SIGNIFICANT ‘seepage’ of storm water inside Stephen’s car…even though it had been safely parked on the ‘protected’ side of the large GDN building during the worst of the storm.

“And the SMELL, once it actually started to dry out, was something ‘special!’ After we made our way back to Liz in Houston, we assessed the real water damage…and it was noticeably worse than any of us had imagined. Eventually, Stephen’s insurance company officially ‘totaled’ the vehicle, even though it was still drivable. That soaked interior and instrumentation were beyond help, and we never did get rid of that ‘storm water’ smell!”

Today, we know MANY people along the Louisiana, upper Texas and Mississippi coast are currently in the midst of similar experiences. And SERVPRO teams nationwide are already mobilizing to assist with the recovery from Hurricane Ida. If only our “Hurricane Diaries” folks had known that SERVPRO of Northwest San Antonio actually has specialists in vehicle water damage remediation and restoration! It could have saved the car…although it would have made for a less engaging story!