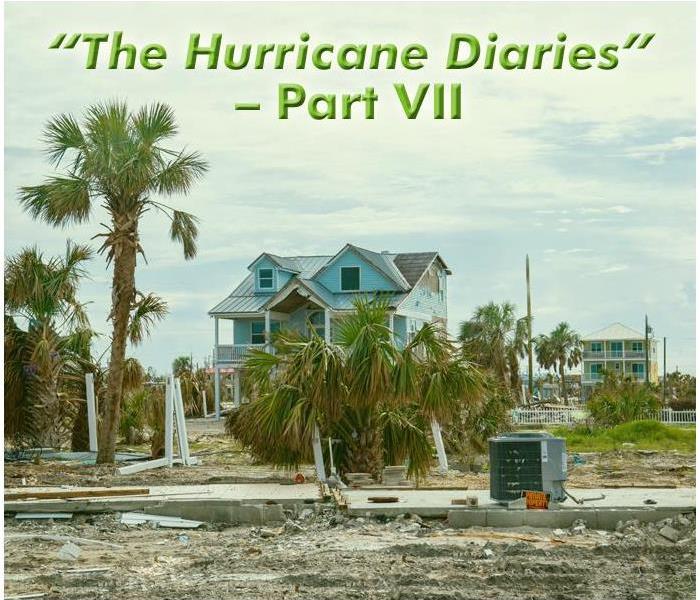 With ANY force as destructive as a hurricane roars ashore, structures that were there one day can literally disappear the next!

As we – fingers crossed – began to see an end to the 2021 hurricane season, we know many are still reeling from the effects of earlier named storms along both the Gulf Coast and Atlantic seaboard. In fact, Hurricane Ida continued to leave a wake of destruction in her path as she moved up the Mississippi River valley and into neighboring states. So even as the destruction now fades from the headlines, the aftermath for residents affected by ANY storm continues for months or even years!

And this impact was experienced directly by our “Hurricane Diaries” team member, when her family personally felt the effects of Hurricane Camille when it struck the Mississippi coast in 1969. She once again shares these recollections in another “Diary” entry particularly relevant to this situation, and encourage you to check out some earlier installments chapters (Part I, II, III, IV, V and VI), then dive right in to this new chapter:

“While I’ve shared some very early childhood memories, and some very distinct career memories, of hurricanes in my lifetime, this particular one possibly had the greatest impact on me. For the first time, I had the beginnings of an understanding about ‘real’ things as I would be entering my second year of junior high school…or, at least my parents had started to discuss more ‘adult’ matters in my presence.

“Either way, I was very aware of the major upheaval that was about to happen in my life. I had a good life in La Porte, with friends and a social life, respected academic standing, and had just earned first chair clarinet in the Junior Bulldog Band. But, a job offer too good – and lucrative – for my Daddy to pass up had presented itself (especially as paying for my collegiate education loomed closer and closer), so we would be moving back to Mississippi. We had lived there during my first grade year, and half of second grade before returning to La Porte and our home my parents had built after World War II.

“However, after being absentee landlords for those 18 months, my parents were convinced they needed to sell my childhood home prior to this move. Fortunately, my father had longtime family friends just across the Singing River outside Pascagoula, MS, where he could stay while beginning his new position and searching for our new family home. My mother, my little brother and I stayed behind to get the house and yard in tip-top shape for sale.

“Remember, this was the summer of 1969; there were no picture phones, no fax machines, no desktop computers…and you PAID for every single minute of long-distance telephone calls. So my Daddy would go look at houses every weekend, sometimes even after work during the week, and take notes. He would then call Mama and describe the house, property, location, features and price. They would discuss and decide whether to make an offer or to keep looking. That level of trust STILL evokes profound feelings in me!

“Being that in-tune probably made a major contribution to their 59 years of marriage. However, despite their shared mindset, he still would NOT make a decision of this magnitude without speaking with her first! And so, began THAT weekend…

“After months of searching and discussing, he found ‘IT’ – the perfect home. Ideal location, good school system, near community stores and conveniences, and priced to move. It had charm, a sprawling fenced yard, actually close enough to school where I would be liberated finally from bus ridership! His sole focus that Sunday afternoon was reaching my mother for her final stamp of approval to finalize the purchase.

“Ironically, a heavy storm had blown through Galveston Bay earlier and left our yard quite a mess with downed limbs and lots of leaves – and this was before we had leaf-blowers. This was good, old-fashioned manual yard work. Meanwhile, my mother supervised the clean-up from her perch atop a ladder while she finished painting the eves along that front corner of the house. With no fancy answering machines (we had just gotten off a party line less than a decade before!) and no way to hear the one phone tucked away in the opposite corner of the house inside, Daddy tried in vain to get her okay.

“Having lived along the Gulf of Mexico for the majority of his life, my father was quite accustomed to weathering hurricanes. So, when they lost phone and power lines that night as Hurricane Camille roared in to their west at Pass Christian in Mississippi, my father just hunkered down with the rest of the family and waited it out. Luckily, the western Alabama coastal region was spared the worst of the storm and the next day Daddy ventured out to check on the house with his real estate agent. He had managed to get through to Mama early that morning and they had decided to make the purchase immediately, since schools would be starting SOON.

“So, Daddy and the agent made their way to the site which had so captivated my parents…and found a slab. Nothing else, no frame, no outbuildings, no fence, just a hunk of land with a big concrete slab sitting in the middle. At that point, my parents KNEW their greater angels had been working overtime on their behalf, and they had dodged a major bullet. If Mama had heard that phone, we could have been the proud owners of a slab, just like too many other residents all along the Mississippi Gulf Coast from Gulfport through to Pascagoula.

“Sadly, their predicament also became our predicament. Almost EVERYBODY needed a place to live. Our furniture and the majority of our possessions were in a storage facility, and we began our new schools in Ocean Springs (just east of Biloxi) while living in a motel room on the highway, with a nice-ish kitchenette. We finally resigned ourselves to not being able to find a home large enough for everything, and many items remained in storage for that year. And as a maturing teen, I finally understood what it was like to have to ‘carry on’ after a hurricane turns your life upside down.”

Even though the “dramatic” stories and headlines may have disappeared from news stories, you can count on both our SERVPRO of Northwest San Antonio team and the teams from across the nation to stick around even when it doesn’t make headlines…because we’re committed to making it “Like it never even happened.”