When Elements Collide, The Results Are RARELY Good! 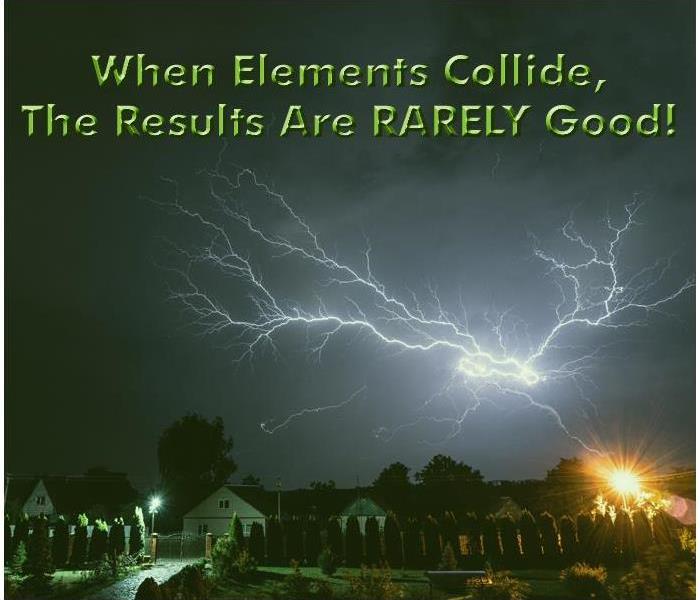 When we think of spring or autumn storms, usually the first thing that comes to mind is flooding…but fire and water can make a potent mix!

In a post we did about the rise in popularity of outdoor features, experts noted the expanded presence of both fire and water elements into these al fresco entertainment spaces. And we’re the first to admit the combination of these two lively natural forces can be mesmerizing. From a cozy fire pit with a fountain as a backdrop to an infinity-edge pool visually spilling into glowing fire features, each seems to intensify the qualities of the other.

The same holds true of a spectacular thunderstorm. The pyrotechnics of charged lightning streaking across the sky, as rain rhythmically taps around us, has captivated the human imagination for millennia. It’s truly a breathtaking phenomenon to behold…and potentially, equally dangerous!

Let’s be honest, when you hear storms, your first thought is probably flooding and water, with a secondary picture of wind or tornado damage. But we’d wager that fire probably falls completely off your radar, unless YOU’VE been personally affected. Yet, in the last month alone, three lightning strikes in the San Antonio area have been responsible for catastrophic house fires.

Carefully controlled, fire and water can be a stunning feature in any home or landscape (just picture a beautiful fire at your feet while lounging in your luxurious soaking tub). But in the hands of Mother Nature on a rampage, the results usually have a considerably more negative impact on the value of your property!

Luckily, you can take a few precautionary steps to lessen the probability of lightning strikes “lighting-up” your home…and investment. And, we found a great starting point:

“Lightning poses a major risk of property damage to both homeowners and renters by causing fires and power surges that damage electronics. The Insurance Information Institute reported lightning strikes cost $739 million in homeowners’ insurance losses in 2014, up 9.7% from 2013. What's more, the report noted the amount of claims was declining (due to lightning protection technology) and the average cost per claim was rising, as damaged electronics become more expensive…Here are four ways to protect your home from lightning:

According to State Farm, the top 10 states for lightning damage insurance claims in 2014 were: Georgia, Alabama, Texas, Louisiana, Illinois, North Carolina, Tennessee, Indiana, Florida and Missouri. Yep…there we are, right in the mix. But, whether flood, wind OR fire damage from those storms, you can count on our trained remediation, mitigation and restoration specialists at SERVPRO of Northwest San Antonio. We’re experts at dealing with what happens when elements collide – whether wind, water or fire!